0.-Short biography.
...................
I grew up in Poland, in the communist era, in a disfunctional artist family (filmmaker and fashion designer), studied, first science, then fine arts in Lodz.
It was an interesting time, in the sense that there wasn't much to do - you could not run a business or diversely politicise - a lot of propaganda but no deadly commercial distractions. Therefore, we spent time dreaming, reading books, watching movies, debating, plotting...
At the age of 22 i arrived in London, with a rucksack and 200 pounds - lived there ever since, i have seen that great city change so much over the years. I continued with fine art for some time but i did not like that scene - i was uncomfortable with its politics and economics, and, besides, i have more respect for creativity with some social value, some objectivity - such as design or architecture.
So, i become an illustrator and worked for the media in London, Paris and elsewhere.
One of my first clients was The Economist- the great global newspaper, which inspired me to set up a company - if only to test the theories and ideas glimpsed from reading it.
The illustration work and the company are my 2 regular jobs, but, since i do other things, i needed something to connect it all - a universal glue - something quick, something everyone understands and responds to - it is photography - my 3rd job.

...................
1.-When you started creating art-illustration with computer as a tool? And what about the digital camera? Was it a choice or a need?
...................
I like change, i like new things, so i became immediately interested in Personal Computers, when they appeared, as was the case with Internet, several years later. When i started using PCs to make illustrations there wasn't much computing power around, so i made bitmaps - printed in black and white and then incorporated into collages and paintings.
Traditional art directors were hostile to those hybrid images, however, as the DTP (Desk Top Publishing) revolution in printing swept them away i was embraced by the new generation and so became possibly the first or, certainly, one of the first Digital artists - calling myself a "cyberartist" - soon I was earning enough to upgrade and upgrade again to more capable machines.
Then came digital cameras, which eliminated the cost and delay of film processing, they are also became very good in low light.
Those technologies were first a choice and then quickly became key tools.

...................
2.-Did using computer as a tool changed your illustration or photographs?
...................
The dawn of computers has brought a fundamental change to the creative process - art and design will never be the same.
One of the reasons is that computer is NOT a tool.
It is a meta-tool, ie. a tool to make other tools, ie. applications (programs).
Since it is not a tool it can not be mastered nor even fully controlled, except directly, by means of programming. Consequences of this are far reaching and mostly corrosive to culture. I am not alone in observing the global decline of creativity, individualism, as well as learning.

...................
3.-You are also interested on developing specific storage drives, e-mail, invoicing... for artist and creative people. That is the case of Netcells. Which are the characteristics of this utility?
...................
People who know me would never accuse me of technophobia, but it is a sad fact that my worst predictions all came true in the recent years.
The future of Internet as it was originally defined in Europe - the open space for free exchange of ideas and information is now in question. We see a concentration of power, decline in knowledge, creativity, individualism - the irony is that this is happening with willful participation of just about everybody, including those who suffer or will suffer most from the changes.
Internet today it is controlled by a handful of giant companies, together with criminals, semi-criminals and other unscrupulous individuals - if you find this hard to believe it is only because you are comfortably isolated from the truth. The socially-minded, good-will, open initiatives are still there but no match for the onslaught of commercialism fueled by massive concentration of capital and consumer information.
The use of applications - free or commercial - is not without problems (to name just a few):
- they are written by other people - we must conform to their way of thinking
- they are not modifiable - we have no say in their evolution, they may vanish tomorrow
- they are aimed at the lowest common denominator to maximise profit or distribution
- their security is unknown, we don't know all they contain
So, what to do ?
On the personal level that was not difficult to decide.
Most of our everyday tasks are simple, repetitive, they don't change much in time. It is perfectly possible to automatise and keep developing them even with the most basic programming skills.
The amount of data we are confronted with is increasing exponentially. The only way to handle that is via database. But that database must be personal, fully accessible and modifiable by the owner of the data.
Learning programming was a great adventure- it dramatically improved my thinking and my use of Information Technology. I realised just how difficult it is to make technology work and how powerful IT can be if you do. It made me resistant to error ;-)
Then, it was only logical to share those gains with others.
Netcells was conceived as an artist network in the year 2000 - as such did not grow much, but the facilities it provides - privacy and security of the data, personalised, comprehensive support (from the mundane to strategic), independence from technology suppliers, continuous access to developers - quickly became indispensable to our Users - mainly creative professionals worldwide.
User Zone application - NUZ is totally flexible and exclusive to our Users - we help them build their own, individual web presence, true to our motto: "power to creative people".
I made Netcells a company in 2004, so, it is more than 10 years old and since less then 1 in 3 companies survive that long it looks like an achievement, especially since it was built with 0 capital. I would like it to survive me, and for that it must grow - this is my task for the next year or two, searching now for worthy collaborators...

...................
4.-It can be said that you are a fully European worker. Born in Lodz, but your workshops are based on Paris and London. This means that you, and people like you, really need movable tools and online systems.
...................
Yes, i like this description :-)
Indeed, re-setting the mind by changing the language and the respective social "Operating System" while moving between London, Paris and Valencia is a formidable routine - it allows full appreciation of those places.
Netcells provides my own data cloud, which makes changing locations effortless.
Sure, we all need secure storage and our own tools we can modify - this is fundamental - netcells.net.
Europe is a world's treasure trove and the European dream of unity and co-operation must continue.

...................
5.-How could you describe your creative process?
...................
Artists traditionally work by trial and error - copying, scavenging, creating and destroying. That is not very efficient but carried through by emotion, and often hype and marketing.
Computers allow rationalisation of this process. The image is constructed, with elements new and recycled. Time can be stopped, all options stored, total precision achievable with zooming. It is important to keep the process open by including random interactions.
A computer-made image is never finished. It is a stack of possibilities, which can be revoked and recompiled. But, maintaining the emotional charge is a challenge - all trace of human hand is lost, and, additionally, we witness a progressive erosion of the veracity of the image - it comes from the machine - perhaps just a copy or a copy of a copy ?
When creating an illustration i am interested in the intersection between images and the language - those are 2 distinct modes of developing a meaning, which is the function of the picture - like a designer or an architect, i say: "form follows function" - it is a case of finding an efficient container (metaphor) for the meaning. Using paper and pencil i first create an imaginary space where words (concepts) and images (also concepts) meet and collide to create new ones. Then this process continues in the virtual space of a computer program. 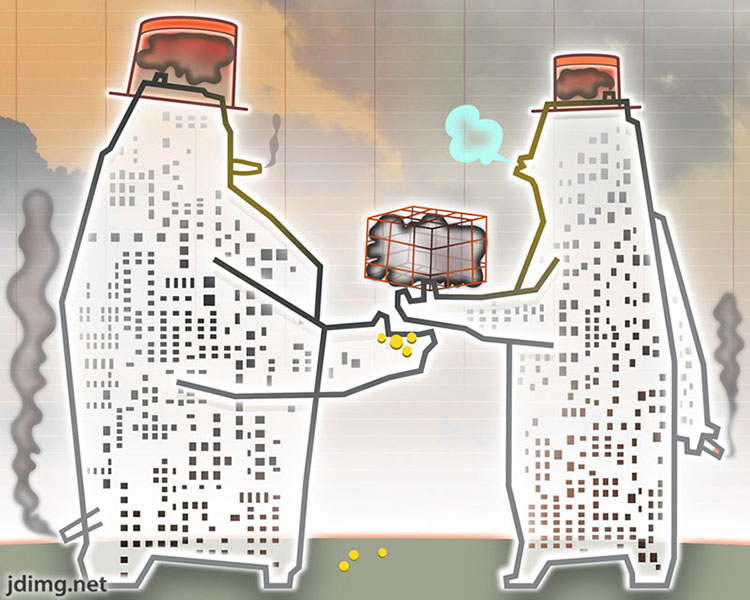